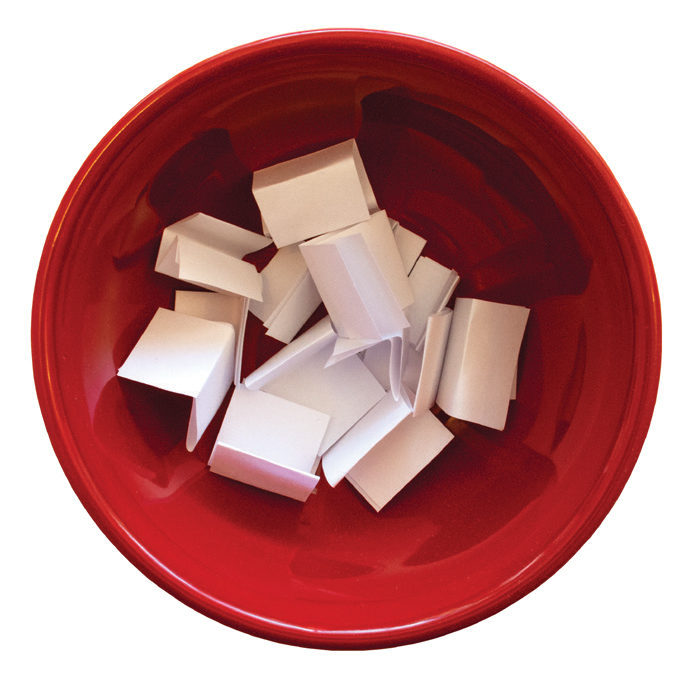 A few years back, our family decided to play a game while recovering from a generous Christmas brunch. Each of us wrote on a slip of paper some­thing we thought the others didn’t know about us. The unsigned slips of paper were put into a bowl, drawn out one at a time and read aloud. All of us were asked to guess who the author might be.

Gathered to play the game were our four adult children, their partners and my mom and dad. We were pretty sure that nothing on those slips would surprise us. After all, we knew each other! We quickly discovered that we didn’t. The first slip drawn turned out to be my dad’s. He admitted that he was the one who had been named the Minne­apolis Tribune’s High School Football Player of the Week. He was still proud of that honor 60 years later but had never told us about it. That would be bragging. The next slip drawn was different. Which one of us had been picked up by the police at a public beach for skinny dipping with his fraternity brothers? All eyes slowly turned to one of our sons, and he sheepishly nodded. The most difficult author to identify had written, “I am secretly in charge of the entire universe.” We were astonished and im­pressed with the daughter who ‘fessed up.

It was fun to play this game, and to find out things we hadn’t know about each other. Yet there were more troubling issues in our lives that were still secrets. Dangerous situations we’d been in. Times of despair we had hidden. Relationship issues that had scarred us or were just now opening wounds. Health worries. And so on. Even though we loved and trusted one another, we chose to keep many of these things secret from one another.

Or we thought we had. That is the trouble with secrets; they sneak out from under the door where we’re trying to hide them. If the content of the secret doesn’t leak, the evidence that there is something painful hidden away creeps out through the cracks of our hideaways like the smoke that frequently wafts out of my toaster. When a couple came to tell me that they were divorcing, they said that they’d kept their marriage together until the kids were older. “They don’t know,” the parents told me. But the kids told me a different story. “It’s about time that they called it quits. Things have been awful between them forever.” This was a painful secret that wasn’t secret.

So it is with congregations where secrets cover up awful things that happened there. Sexual mis­conduct by a pastor or a Sunday School teacher. Pockets weighed down with offering money as the treasurer left the building. Lies about a church leader excitedly shared by gossips. These secrets almost always are carried out by people determined to meet their own needs while harming others. But those secrets really don’t stay secret. They can per­vade congregational life like the stench of a leaking sewage line. When we were young, Tim and I found a new church home. During one of our first worship services there, the pastor announced that we must vow to keep “it” a secret. We didn’t know what this troubling “it” was, but we began to recognize it by the conversations that stopped when we walked by, and by lips that were tightly clamped in carefully composed faces. We could see and smell “it.”

So what’s wrong with keeping secrets a secret? After all, some secrets are frivolous and can stay on our closet shelves. Who needs to know that I stole a quarter off Grandma’s dresser when I was 6? Yikes! I didn’t mean to tell that one. How about the other troubling ones we hide, sometimes even from ourselves? How did secret-keeping work out for Judas? Or for the women in Mark’s Gospel who ran as fast as they could from the empty tomb and “said nothing to anyone, for they were afraid (16:8)”? Their secrets could not, would not, stay secret. You see, it takes tremendous energy to keep something a secret. If you are as old as I am, you remember listening to the radio show where Fibber McGee kept cramming “stuff” into his closet until he no longer could close the door. Suddenly it would burst open with a whole lot of banging and crashing. How we listeners waited for that moment! Our closet of secrets can be as crammed as that of Fibber McGee.

I am convinced that God is opposed to secrets. Judas wrapped the stink of his secret tightly around himself, and decay broke his heart. Are we like Judas? Not exactly. But when we clothe ourselves in our stories of difficult times and throw jackets of secrecy over them, we weigh ourselves down. Are you a victim-survivor of sexual or emotional abuse? Or of bullying or beatings? Do depression or addic­tion haunt you? Secrets about these realities can rot in the locked closet of our souls. When that closet door is opened, we can realize the fresh air of love. Mutual conversation and consolation can restore us to community. Forgiveness of ourselves and others can free us. New energy for our lives as Jesus-fol­lowers can emerge.

This article is excerpted from the November 2018 issue of Gather magazine. To read more like it, subscribe to Gather.